Live animal transport is no monkey business, and DHL used the utmost care for the delivery of an especially important ape.

Kiburi, an 18-year-old Western lowland gorilla, needed a lift from Zoo Loro Parque in Tenerife, Spain, to the ZSL London Zoo as part of an international breeding program for critically endangered species. On a DHL-operated flight, Kiburi traveled 1,903 miles in a custom-built crate and received the attention of zookeepers, aircraft engineers, cargo handlers, security teams, pilots and drivers.

Kiburi arrived at London Heathrow Airport (LHR) on Nov. 18, and made it to the zoo by 8 a.m. the next day — arriving to its Gorilla Kingdom, which is equipped with a private island, hidden caves, giant jungle gym and a flowing stream. The gorilla will meet his potential mates, Mjukuu and Effie, and young family members Alika and Gernot in time for Christmas.

“In time we hope to hear the pitter-patter of tiny gorilla feet once again in Gorilla Kingdom — adding to the dwindling population numbers of this critically endangered species,” Dan Simmonds, ZSL London Zoo’s zoological operations manager, said in a Nov. 25 release from DHL. 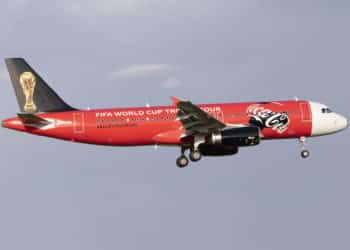